During the Second World War, I was moving with an infantry...

During the Second World War, I was moving with an infantry regiment someplace in Germany. The orders were to execute a surprise attack. It was about two o'clock in the morning, and we prepared to carry all equipment so our two hands would be free. We came to a dense forest we were to use for cover. Very rigid instructions were issued. We were to form a single line and hold each other's hands so no one would be separated and no equipment lost. It was so dark in this area you could not see your hand in front of your face. No talking was permitted. Orders were passed by whispering one to another until all the men in line knew what was going on. We traveled very slowly so our equipment would not make noise.

Somehow the man in front of me let go of the man in front of him. He stopped, whispered to me, "I lost him, I lost him." I asked him to trade places with me. I started to walk slowly, repeating silently but earnestly Mrs. Eddy's poem, " 'Feed My Sheep.' " It includes these words (Poems, p. 14):

Send a comment to the editors
NEXT IN THIS ISSUE
Testimony of Healing
In 1958 my first testimony was published, which told of the healing... 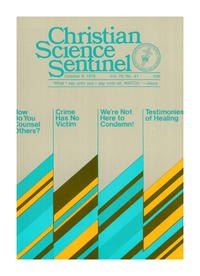