I would like to share a healing I had that really got me started on my own application of Christian Science, although I was raised in it. I hope that others raised in this religion, who may take it for granted, will read this and remember to be thankful for the privilege of being a Christian Scientist.

During the semester break of my first year in college I became seriously ill with whooping cough, and I was unable to return to school. A practitioner was called to pray for me and to treat the problem in Science. 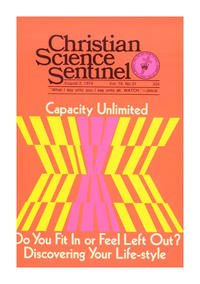