When Do We Begin to Practice Christian Science?

I know a woman who very early in her study of Christian Science began to utilize the spiritual facts she was gaining from it. She had a growth on the end of one of her fingers. It had been removed previously by surgery but had returned. In the Christian Science periodicals she read testimonies telling of others being healed of such things, and she felt sure there was healing for her too. She began to apply some of the spiritual facts she was learning. Though the pain accompanying the growth ceased, the growth was still very much in evidence. 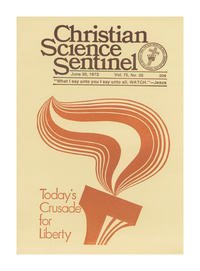