Christian Science reechoes the truth of the Bible that the answer to all human problems lies in a better understanding of God and of man's relationship to Him. This viewpoint is as radical for the world today as it was in the days when Hebrew prophets like Amos, Micah, Isaiah, and Jeremiah thundered their messages to unwilling ears.

These spokesmen for God—for that's what the word "prophet" means—decried the moral decadence about them, complacency in ease and luxury on the part of the few, idolatrous religion, corruption in government, and general immorality, dishonesty, selfishness, and greed. All this had come to pass, the prophets said, because men had turned away from God, rebelled against His law, forsaken the religion of their fathers. Such rebellion would surely bring still more dire consequences. Theirs was a social message, a call for reform; but even more, it was a religious message, a call to return to God. 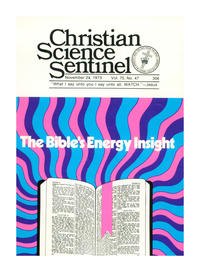