Shortly before World War II, I became suddenly weak and displayed alarming symptoms. I submitted myself for X rays, and the findings were that I had tuberculosis of the left lung and enlargement of the heart. Notwithstanding these findings, I joined the Army. Men joining the Army during the war did not have to be physically examined. When I returned to civilian status after liberation, more physical ailments were added, such as an ulcer of the stomach, frequent serious colds coupled with catarrh, painful headaches, defective hearing and breathing, and many others.

However, these ailments, which kept me in bondage for seventeen long years from 1940 to 1957, made me more devoted to the Anglican Church. I started studying the Holy Bible, reading zealously from Genesis to Revelation. As a result of this study, every time I participated in the Bible Quests, which were published periodically in the "Anglican Churchman," I was always the top winner. The prize given to the winner of each quest was either cash or a Holy Bible. As I received each prize, I gave it away— cash to the church and the Holy Bible to a friend or a relative in need. In spite of my study in search for the Truth, and though I took drugs prescribed by doctors for each of the ailments, I noticed that instead of improving, my health was going down gradually.

Send a comment to the editors
NEXT IN THIS ISSUE
Testimony of Healing
When my oldest sister first told me about Christian Science, it... 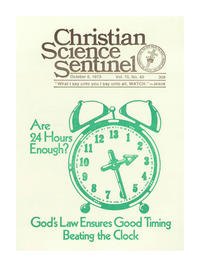