[The above is an abbreviated, postproduction text of the program released for broadcast the week of September 5-11 in the radio series, "The Bible Speaks to You." Heard internationally over more than 1,000 stations, the weekly programs are prepared and produced by the Christian Science Committee on Publication, 107 Falmouth Street, Boston, Massachusetts, U.S.A. 02115.]

[The speaker is Jack Krieger. The questioner is Richard Lombardi.]

Questioner: Most parents really care about helping their children make the most of their education and do well. But really there isn't much more a parent can expect to do, is there, than teach his child good study habits and that kind of thing?Speaker: It's interesting that you use the word "expect." Actually, expectancy has quite a bearing on experience, as recent studies indicate. I recall an instance after tests when certain children were designated as "spurters," those possessing exceptional learning qualities. The fact was that they had been selected at random, and the teachers only thought these children had high IQ's. But they expected more of them because of this. As a result the children actually achieved more. All this hints at the effect of expectant thought on experience. It certainly indicates something of our responsibility, our opportunity, as parents. We need to ask ourselves what we are expecting our children to measure up to.Questioner: But in the case you just referred to, the teachers were misinformed about the ability of the students. What basis can a parent have for expecting his child to do well? He certainly isn't misinformed about the child's ability. 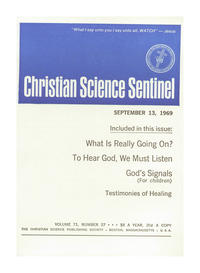