On Changing an Attitude

What sometimes appears to be a faulty attitude in another is often our cue to weigh a situation carefully in relation to our own mental state. Should the change of attitude come in someone else, or should there be an honest appraisal of ourselves to see if the corrective most needed should be applied in our own consciousness? A wrong attitude is a hazard, whether in business, in the marriage relationship, or in problems between parent and child, for it tends to obstruct the natural unfolding of good.

Knowing that all attitudes, right or wrong, are the fruit of right or wrong thinking, the Christian Scientist takes careful note of what he is entertaining in consciousness as valid. Errors may escape detection by one who is not awake to the deceiving arguments of the carnal, or mortal, mind and so responds unthinkingly to mesmeric external influence, believing it to be his own thought. Alert watchfulness that separates the false from the true can prevent the buildup of a false attitude. If the picture before one is being suggested by personal sense or human opinion, he can cut across old mental grooves where evil was accepted as a normal state and allow his thinking to he governed by the scientific facts of being, seeing the perfection and innocence of man as God's reflection or image. On this higher level of thinking one finds release from self-made, stultifying beliefs. The variable, unsatisfying, human illusions give place to changeless, divine Principle, God, and a new pattern of thought and behavior unfolds. 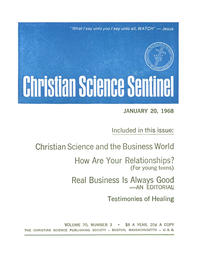