The Consistency of Christian Science

Critics of Christian Science have been known to rebel at the association of the two words "Christian" and "Science." But to one who understands something of this religion, there is nothing inconsistent in this name. It implies that Christianity is Science and that true Science is Christianity—the Science of Truth. In other words. Christianity and Science are identical.

Christ Jesus was a true Scientist: he demonstrated Christianity as Science and left his precepts and his works as the model of Christian consistency for all people and for all time. The truth he taught is Science, and it is always demonstrable as Science. His statement (John 8:32), "Ye shall know the truth, and the truth shall make you free." implies true knowledge, which is scientific. Jesus not only revealed the absolute truth, but showed how this truth is applied to human problems. 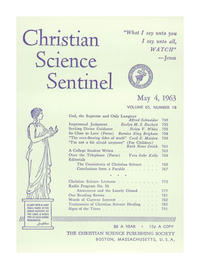