With all my heart, I thank God for Christian Science. When I was about twenty years old, I had a nervous breakdown. A spinal curvature had developed, certain organs were not functioning, and I suffered from melancholia. Over a period of eight years, during which these conditions became worse, medicine, osteopathy, and other treatments were tried. From these I received no aid, and during this period I was never free from pain. One of the members of my family suggested that I visit a certain clinic. After giving me thorough tests, the head physician there dismissed me, saying he had many cases similar to mine, but he could do nothing for them. He then recommended I try Christian Science. However, I took no heed of this advice and went on in the usual way. Finally, I became bedfast.

At this point my mother decided to go with me to California, thus separating us from family ties, since there was much human sympathy to be overcome. Here, in great desperation and because of her prayers, my mother was led to a Christian Scientist in a California beach town, who, after listening to her story, directed her to a practitioner. My mother replied that she had no faith in Christian Science, but she finally consented to see her. When she went to the practitioner's home, she poured forth her story; and the practitioner agreed to pray for her to free her from fear and worry.

Send a comment to the editors
NEXT IN THIS ISSUE
Testimony of Healing
How quieting and strengthening... 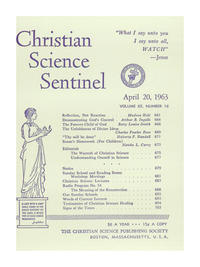