Man Is Not a Sinning Mortal

Christian Science takes issue with several religious doctrines that are basic to the teachings of scholastic theology. One of them has to do with the belief that God created man innocent of sin in the beginning and then endowed him with what is called freedom of choice, by which man brought sin upon the human race.

Such a theory presents a view of God, and of man, made in His likeness, that is responsible for endless confusion. Acceptance of this falsity colors one's entire concept of the Christian religion. It is like making an error in a mathematical computation and then carrying the error all the way through; the error would naturally appear in the result, and the inclination might be to blame the principle of mathematics rather than the mathematician. 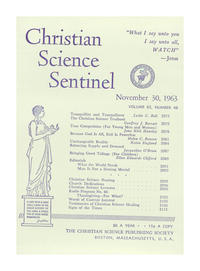