My husband learned of Christian Science...

My husband learned of Christian Science in a public library many years prior to our marriage. To him, it was an answer to prayer and the end of a wide search and an investigation into several religions. In Science he-found the peace of mind and hope which satisfied his spiritual longings, and he became an earnest student of it. He was healed of a nervous breakdown, resulting from overwork and strain while educating himself to become a lawyer. While on active duty in World War I, he had many proofs of God's loving care and protection both in camp and in battle.

It was through him that I became interested in Science after the war, and this religion has proved to be the greatest blessing of my life.

Send a comment to the editors
NEXT IN THIS ISSUE
Testimony of Healing
"Trust in the Lord with all... 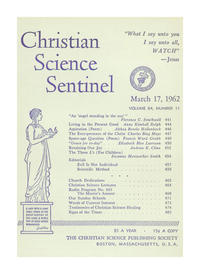