I was brought up in a Protestant...

I was brought up in a Protestant religion in the fear of the Lord, and I mean fear. I believed that the Lord, although just, was harsh and punishing. I felt that Jesus was kind and tender, but must be far too busy to pay any attention to one small girl. It was not until I was twenty-one that I read in a Sentinel that God is not anthropomorphic, but incorporeal (I had to look up these words in a dictionary), that God is Principle, that He is Life, Truth, Love, Soul, Spirit, and Mind. The explanation of these synonyms for God was so logical and satisfying that I accepted Christian Science without further question.

I have had many healings in Science. Some are so dim in memory that I cannot now recount them. But one stands out. I found myself with a severe heart condition, which had come upon me so gradually and imperceptibly that I was not alert to what was happening until I found myself in trouble. I worked prayerfully for myself, but grew steadily worse. Then one day I had to go upstairs. I had grown to dread the stairs, but I started up slowly. After a few steps I had to stop and lean against the wall to keep myself from blacking out. I was miserable, discouraged, frightened, and very much annoyed with myself. 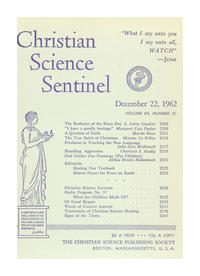