Assembled at the base of Mount Sinai, the children of Israel heard God speak to Moses on the mountain. Here God gave Moses the Hebrew Decalogue. Here the foundation of a new nation in the promised land was laid and based on the First Commandment (Ex. 20:3), "Thou shalt have no other gods before me," the greatest commandment of them all.

According to God's instruction to Moses, for two days the Hebrews were cleansed and sanctified in preparation for receiving His divine laws. Although fire and smoke came from the mountain and lightning appeared in the skies on that eventful day, apparently the children of Israel were not inconvenienced or fearful. Perhaps the blaring of the trumpets enlivened and awakened them to the spiritual significance of the precious and profitable incident they were chosen to witness. But one likes to think that their spiritual preparation superseded everything else: that their thought was so consecrated and hallowed that they discerned the great import and solemnity of the occasion and understood and appreciated the divine message. Surely, the light of Truth and Love shone on them as they heard God's inspiring directives. 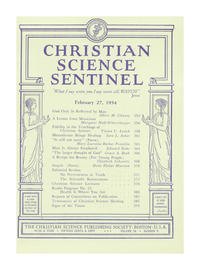