"That no man take thy crown"

In moments of vision and exaltation, the Psalmist saw the true nature of man and his inalienable relationship to the All-in-all. He saw the man of God's creating, crowned with glory and honor. "Thou madest him," he declared, "to have dominion over the works of thy hands; thou hast put all things under his feet."

This consciousness of dominion was paramount in the sayings of Jesus; it was evident in the authority of his deeds. He spoke often of the kingdom, but it differed from the concept of those around him in that it did not involve material power. "My kingdom is not of this world," he told his disciples. The message which he brought to humanity, which he taught and lived, involved kingship; it gave to those who perceive it the assurance of sovereignty. In Revelation, the first chapter, we read that Christ Jesus' complete overcoming of all evil "hath made us kings and priests unto God." 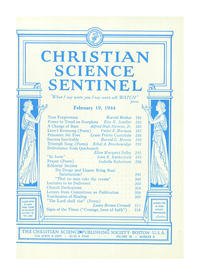