Every student of Christian Science is in some measure a practitioner, since he adapts to his affairs the truth as it unfolds from his daily study and investigation. Not only does he apply Science to his own problems, but occasionally, although not yet listed as a practitioner, does he assist others, relatives or friends for example, out of their difficulties.

Here is one of the encouraging features of Christian Science, that it can be utilized by the beginner, and with effect; because, as Mary Baker Eddy, its Discoverer and Founder, has well said, "A grain of Christian Science does wonders for mortals, so omnipotent is Truth, but more of Christian Science must be gained in order to continue in well doing" (Science and Health with Key to the Scriptures, p. 449). 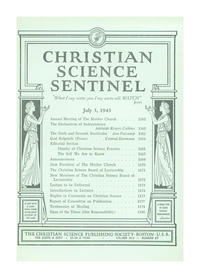