"I shall not want"

The word "want" is defined, in part, as "to feel or be conscious of the absence or need of." Therefore, the statement "I want" indicates a consciousness of some lack. This negative belief of want must be reckoned with, since mortal mind, which fathers the belief, claims that it has power. In "The People's Idea of God" Mary Baker Eddy has written (p. 7), "To remove those objects of sense called sickness and disease, we must appeal to mind to improve its subjects and objects of thought, and give to the body those better delineations." This might well apply to the object of sense called want.

Since, as it is generally admitted, one may control his own thinking, every normal individual is able to accept or reject "subjects and objects of thought," whether good or bad. "As he thinketh in his heart, so is he," is a true saying. What we believe to be true regarding our human experience evolves that experience. Humanly speaking, what we are conscious of, what we think in regard to ourselves, determines what we are. If one believes he is in need of some thing, the lack which he fears may appear in experience; hence the importance of improving "subjects and objects of thought." Deterrents of the realization of abundant good are excluded from the consciousness which is filled with the realities of being. When error is ejected from thought, its manifestation disappears. 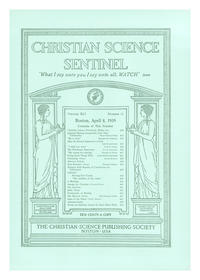