When the South Wind Blows Softly

The recorded experiences of Paul, that intrepid soldier of Christ, are vibrant with interest to the thoughtful student of Christian Science, and contain for him many illuminating lessons. One recorded in the twenty-seventh chapter of Acts may be noted here. The ship upon which Paul and other prisoners were being carried to Rome, after casting about to find a favorable harbor on the rocky shore, had finally dropped anchor at "a place which is called The fair havens." The master of the ship, however, wished to start out again, in spite of Paul's warnings to the contrary, for with his prophetic vision Paul foresaw disaster in such a course. "Nevertheless the centurion believed the master and the owner of the ship, more than those things which were spoken by Paul. ... And when the south wind blew softly, supposing that they had obtained their purpose, loosing thence, they sailed close by Crete." The supposedly favorable wind, however, proved but a false friend, for the record goes on to state that "not long after there arose ... a tempestuous wind" followed by high seas and shipwreck, wherein Paul and the others narrowly escaped with their lives.

The Christian Scientist loves to ponder those early days, with their trials and privations, their testing times and victories, for he sees in them largely the same arguments of error which would assail the students of to-day in furthering the Christian Science movement, which is once more restoring to the world the lost element of healing. He smiles as he reads that "when the south wind blew softly" those misguided mariners, supposing they had obtained their purpose, sailed away into disaster. Perhaps he has had some experience himself of the blowing of that same south wind, and he knows just how alluring it can be. For the south wind, soft and slumberous, may be said to typify a state of belief, deceived and deceiving, wherein one goes, dreamily content with ease in matter, beguiled into a belief of safety where there is danger, not to himself alone, but for others as well. The skies are blue, the sun is warm, and he drifts idly on, steeped in self-gratification. The mesmeric lapping of the little waves of error lulls him into apathy, and he succumbs all too easily to that treacherous sense of peace which has no enduring substance, for it is not of God. 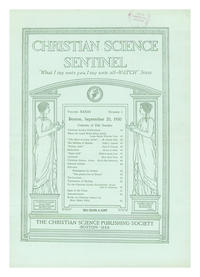