Each Christian Science church, although a branch of The Mother Church, is in itself individual and complete, and should be the church home of its members. It should demonstrate and manifest those qualities pervading every home governed by Principle, and set forth in "Science and Health with Key to the Scriptures" by Mrs. Eddy, in the words (p. 58), "Home is the dearest spot on earth, and it should be the centre, though not the boundary, of the affections," because as Paul, ever conclusive in statement and argument, reminds us, there is "one God and Father of all, who is above all, and through all, and in you all." Home is defined as "one's birthplace; the house in which one lives; the abiding place of the affections; a place of refuge and rest." Therefore man being spiritual and cognizant of his true selfhood as a child of God, realize that the only real home or abiding place is in God, who fills all space. Throughout his earthly career Jesus proved that his Father's house, wherein "all things work together for good," is truly itself established, thus showing to all how they, too, might take part in the home-coming which he himself continuously realized in ever turning to Principle, and which is for each individual at all times and in all places. The view from this abiding place of Spirit is holy and unlimited, the vision gained is eternal, and the true spiritual idea is in the place prepared, where are many mansions. So a man is at home whenever he is engaged in activity derived from Spirit, through helping to establish on earth the brotherhood of man, by bringing to the understanding the facts of being, the relationship of God and man, which is the only true relationship or affiliation or association there is, experienced through the unfolding of Truth.

In ancient times cities had as centers of activity forums, big open spaces where the people met, as it were, on common ground, for worship, business, or amusement, because about these out-of-door places were built temples, judicial buildings, and mercantile markets. At Athens, Corinth, Sparta, and Pompeii there Were noted forums, the most celebrated being one located at Rome, where there were not less than nineteen. The fame of this, the jorum. Romanorum, has come down through history, recorded in one temple after another of architectural magnificence, in beauty of embellishment, in colonnades and triumphal arches. There amidst these surroundings all important political questions were dealt with, great orations delivered, enlightening the people assembled for the solving of manifold problems, or again gathered with joy and happiness in friendly converse. To-day the world has its forums, the cities and towns, but its great forum is Christian Science, where through the triumphal arch of Truth all nations and peoples can meet and all problems be solved through the enlightenment which comes with the understanding of infinite Love. For the harmony and happiness of this the world's great forum are in its joyous activities, the chiefest of which is the building of the temple, that temple whose foundation is God, whose corner stone is Christ. 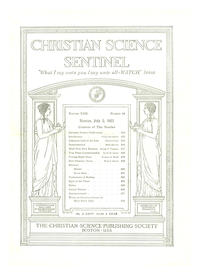