Perhaps in nothing has human thought been more subject to erroneous belief than in its concept of the truth concerning the immanence of God. All Christians, of whatever denomination, profess to believe that God is infinite. An examination, however, into their application of this belief to everyday living, proves it to be an admission in theory only, and quite rejected by them in practice. If God is infinite, there can be no place where He is not; there can be no place nor particle outside His presence. Then all reality, all that lives, or moves, or is, dwells in Him and can have no possible existence outside of His being and presence. Christ Jesus said, "God is Spirit" [Revised Version]; and Paul says in Acts, "In him we live, and move, and have our being." Then all live in Spirit, God, and there is no life outside of Him.

Our actual beliefs control our actions; our professed beliefs may or may not do so, depending upon their agreement, or otherwise, with our real convictions. Would any Christian, really believing in the infinity of God as above stated, knowing Him to be only good, without "shadow of turning," as well as omnipotent, having all power, ever be found entertaining a belief in evil within such infinity, to the extent of attempting to practice it? Surely not. Why then do Christians thus accept the truth of God's infinity in theory but reject it in practice? It is a common thing for many to pray God to bless various good enterprises, as though God were not infinite in goodness. One also hears the teaching that He is especially present in a house dedicated to His worship; as though there could be abundance of infinity in one place and a lack in others. It is true that the psalmist, marveling at the prosperity of the wicked, said, "When I thought to know this, it was too painful for me; until I went into the sanctuary of God; then understood I their end;" but here the change was doubtless in the worshiper, wrought not through any mere change of location but by his turning away from material things, so distracting to the physical senses, and by coming into conscious harmony with Spirit, divine intelligence. Does not Jacob at Bethel express this thought when he says, "Surely the Lord is in this place; and I knew it not"? He did not have to bring God down from a throne in the sky, for the divine Mind is ever present. Jacob needed only to know the presence of divine consciousness. 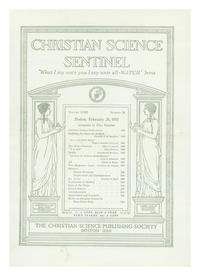