With a foresight born of absolute consecration to God, good, Mrs. Eddy says on page 96 of her book, "Science and Health with Key to the Scriptures": "This material world is even now becoming the arena for conflicting forces. On one side there will be discord and dismay; on the other side there will be Science and peace." Although the burden of unjust taxes, hard labor, and corporal punishment lay heavy upon them, the children of Israel did not seem ready to exchange the fleshpots of Egypt for the unknown land which had been promised to their fathers. By his understanding of God, Moses freed them from their bondage to the Egyptians, started them on their journey, and for forty years helped them to prove that they could be sustained in the wilderness. Jesus of Nazareth did not hesitate to proclaim the absolute truth to a world evidently not ready to receive it, knowing that the good seed sowed in good ground must bear manifold fruit even though some of it falls on stony places and dries up. A little leaven will finally leaven the whole lump. Martin Luther did not temporize with error; he perceived the heavy burden cast upon the people by political and ecclesiastical autocracy, fostered by ignorance of God and sustained by fear of the inquisition, and by his understanding of God he hurled defiance at tyranny in these words: "I cannot, I will not retract anything, unless what I have written shall be shown contrary to Holy Scripture or to plain reason; for to act against conscience is neither safe nor upright." And he closed with the memorable words: "Here I stand. I cannot do otherwise. God help me. Amen." Luther's unhesitating devotion to Principle helped to bring about the Reformation.

Mrs. Eddy with unselfed love does not merely question humanity: Are you ready to assimilate the truth? She brings all her tithes into the storehouse and so prepares all nations and people to receive God's blessing. The so-called sane and safe policy originating in fear of matter and ignorance of God results in wars and rumors of war, famine and pestilence, unrest in industry, and dissatisfaction and discord in political and religious circles. As we read in Isaiah, "None calleth for justice, nor any pleadeth for truth: they trust in vanity, and speak lies; they conceive mischief, and bring forth iniquity." 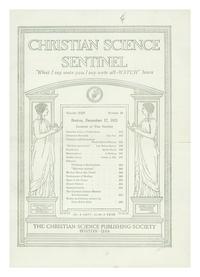