The love of persecution is an innate feeling of the human mind. Historically it is written, in letters of fire, across the pages of the world's story from Adam to to-day. Philosophically, its reason is to be sought in the little word "fear." If a baby were to shake a fat fist at Mr. Smith in Broadway, Mr. Smith would smile and pass by. But if a roustabout were to do the same thing, Mr. Smith would probably seek the police station and protection. The Smith family, however, is a large one: it has many facets to its character. If the family representative happens to be a clergyman, and finds that Mr. Jones is preaching a doctrine which is considered unorthodox, he gets into his pulpit and gives Mr. Jones as bad a quarter of an hour as any to which Cotton Mather or Jonathan Edwards ever subjected the sinners of Boston or Northampton. If, again, the Mr. Smith should have joined the medical profession, and should have heard that Mr. Robinson was practicing in an irregular manner, he would no doubt write to the local representative of the medical association, and implore him to take steps to prevent people from being treated by any method save the extremely unsatisfactory one adopted by himself. 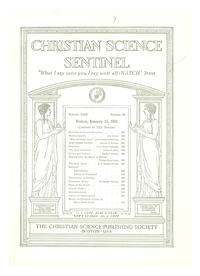