If Christmas means anything in Christendom, it must mean rejoicing. And yet this rejoicing should be the very opposite of the ideal of rejoicing which exists in the carnal mind. The rejoicing should come not from a sense of pleasure in the flesh, but from a realization of the allness of Principle and the utter nothingness of matter. When Job said, "In my flesh shall I see God," he did not mean that, some day, the physical man would stand before an anthropomorphic Deity, in a material heaven. He meant the very reverse of this. He meant that he would live to prove the power of Spirit to overcome the flesh, in the healing, as the Psalmist promised, of all his diseases and the mastery of death. That the writer of Job had grasped the full implication of what he was saying, any more than did the Psalmist, is improbable. They indeed saw in a glass darkly. Not until the first Christmas had passed, and Jesus the Christ had trodden the Jordan valley, preaching on the hillsides, healing in the cities, and, in the night-time, striving to read the story of creation under the stars, was a new meaning to be given to the words of the Lord, spoken out of the whirlwind, "when the morning stars sang together, and all the sons of God shouted for joy."

Christmas then is the day of the marvelous demonstration of the virgin birth. It is the anniversary of the day when, as Mrs. Eddy writes, on page 29 of Science and Health, "The illumination of Mary's spiritual sense put to silence material law and its order of generation, and brought forth her child by the revelation of Truth, demonstrating God as the Father of men." Every day then should, to the Christian, be a Christmas day, a day of rejoicing over the knowledge that matter is nothing, and the flesh consequently subject to Spirit. That was the whole tenor of the teaching of Christ Jesus, "It is the spirit that quickeneth; the flesh profiteth nothing: the words that I speak unto you, they are spirit, and they are life." Because of this, it is the work of every Christian to strive hourly to see with the eyes of Jesus the Christ, to hear with his ears, and to walk in his footsteps. This can only result in the determination daily to take up his cross, as he required, to shoulder, that is to say, the world's hatred of Truth and Love by a surrender of one's own materiality. Then of all days ought Christmas day to be a day of spiritual realization rather than of material indulgence. But herein comes the danger of days set aside as religious festivals. Why should a man be better or worse one day than another? Does the image and likeness of Principle vary in its perfection? As Mrs. Eddy writes, on page 260 of "The First Church of Christ, Scientist, and Miscellany," "An eternal Christmas would make matter an alien save as phenomenon, and matter would reverentially withdraw itself before Mind. The despotism of material sense or the flesh would flee before such reality, to make room for substance, and the shadow of frivolity and the inaccuracy of material sense would disappear." 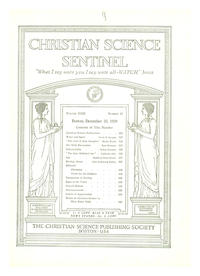