A group of people, if asked to formulate a definition...

A group of people, if asked to formulate a definition of religion, would probably offer many and diversified replies, conforming to the practical or theoretical aspect of religion involved in their experience. Christian Science, explaining religion on the basis of absolute metaphysics, wholly eliminates the ceremonial and superstitious beliefs usually included in such a definition; for notwithstanding the scholar's claim for the inseparability of religion and magic, Christian Science establishes an interpretation of religion with which superstition and ceremonialism could have no possible relation. All superstition is ignorance, and ignorance could never form an intelligent concept of religion.

Send a comment to the editors
NEXT IN THIS ISSUE
Article
There are periodicals published by learned societies,... 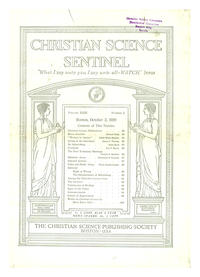