I wish to tell of a very interesting case of healing under...

I wish to tell of a very interesting case of healing under Christian Science treatment that I have recently experienced. I had a severe fall while roller-skating and sustained a serious injury to a tendon in my leg. I managed to walk home (which fortunately was near by), but very slowly, as it caused intense pain if I even attempted to bend the leg. As soon as I could get away alone I began to treat myself in Christian Science. I had such a clear realization of the truth that I at once felt relieved. As I was the only Scientist in the house, I thought it wise to get some one to help me, and I telephoned to London for a friend to treat me, with the marvelous result that in forty-eight hours the tendon was healed and I went out for an hour's walk! Although the demonstration was made, I received treatment for a few days longer, as the leg was somewhat weak, but my walking was not interfered with any more. All in the house were much impressed by the rapid healing, for only a few months before a brother had had exactly the same accident while playing cricket, he being under the care of doctors. His leg was in splints for over three weeks. He suffered much pain at first, and even after the splints were removed he suffered much from stiffness.

Aside from the above-mentioned healing, I have endless cause to be thankful for Christian Science. I have been cured of lifelong anemia, and before I came into Christian Science, some eight years ago, I had lived on tonics, the doctors putting the law upon me that I could never get on without them. I have never touched a drop of medicine since coming into Science, and instead of being dead, as in the old thought I should have been, the disease has vanished, and I have proved that my life is in God and not in tonics. I have also been healed of a sensitive condition of the lungs. I always dreaded the winter, as it invariably meant at least one bad attack. Though I now occasionally have colds, they are not severe and I do not trouble about them.

Send a comment to the editors
NEXT IN THIS ISSUE
Testimony of Healing
About four years ago a friend of my husband came to... 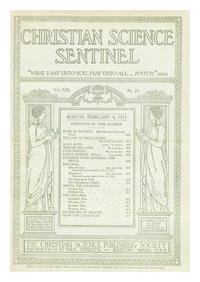