Our critic speaks of the "cheap dismissal" of pain and...

Our critic speaks of the "cheap dismissal" of pain and suffering in Christian Science, and assumes that it blandly ignores their value in spiritual development. Had he read the text-book, Science and Health, he would have learned that the position of Christian Science on this subject is exactly that which he defines as the Christian view. He says: "It [pain or suffering] was the warning voice that something was wrong and needed adjustment. Its intention was always remedial, to prevent the mischief going farther, and to demand the application of the remedy." On page 265 the Christian Science text-book says, "The loss of earthly hopes and pleasures brightens the ascending path of many a heart. The pains of sense quickly inform us that the pleasures of sense are mortal, and that joy is spiritual. The pains of sense are salutary, if they wrench away false pleasurable beliefs and transplant the affections from sense to Soul, where the creations of God are good, 'rejoicing the heart.' " And a multitude of quotations of similar import might be given if necessary. The implication that Christian Scientists pay no price for their spiritual advancement is thus shown to be without foundation, and is in singular contrast to the complaint of another critic that Christian Science is ascetic in its practice.

Attempts are made to justify such criticism as I am dealing with on the ground that Christian Science teaches the unreality, the nothingness of pain. If unreal, how can it be salutary? Undoubtedly there is seeming contradiction here to the superficial thinker. But the contradiction is only apparent, as I shall endeavor to show. The fundamental truth of Christian Science is that "all is infinite Mind and its infinite manifestation, for God is All-in-all" (Science and Health, p. 468). This Mind, being omnipotent, omnipresent, omniscient, perfect Love and holiness, there can be, absolutely, no reality in what is opposed to it, viz., evil. There are some "orthodox" thinkers who reconcile their beliefs in the reality of evil with the infinity of God by the supposition that He has in some way "limited" Himself, but to most men this is an inconceivable proposition. Christian Scientists therefore give no place to evil except as a negation—just as darkness is the negation of light, So that the varied forms of evil—sin, sickness, and death—have a "relative" reality; that is, they are real only to human sense.

Send a comment to the editors
NEXT IN THIS ISSUE
Article
We are told by John that "God is love." Christian Scientists... 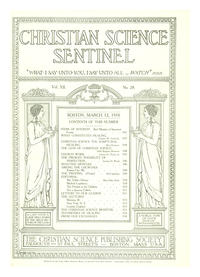