The Government has won its suit against the Standard Oil Company and the United States Circuit Court has ordered the corporation dissolved as an illegal corporation. The case is one of the most notable in the history of the nation. Thirty-three of the seventy-odd subsidiary corporations, however, are excepted from the order of dissolution, and the bill is dismissed as against them. The order will take effect in thirty days, unless suspended by an appeal to the Supreme Court, which will doubtless be taken. It is stated that the attornesy of the corporation have no hope that the decision will be reversed, and are now considering what to do, as there must be a reorganization to keep within the law. The proposition to form a big corporation with a capital stock of half a billion. to buy out all of the small companies owned by the Standard and which come within the scope of the court decision, is favored by but a few of the lawyers. A change in the Sherman anti-trust law is advocated.

Barbados, West Indies, has provided a greater number of workmen for the Panama canal than any other country, having sent there, since the United States began work on the canal, more than twenty-two thousand laborers. These men are efficient and thrifty, and in the present year have sent back home six hundred thousand dollars of their savings. These characteristics are largely due to the fact that the inhabitants are obliged to work, because the island is the most densely populated country in the world, there being, in round numbers, twelve hundred people to the square mile. 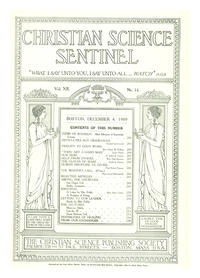