It is alleged that "Science and Christian Science are...

Christianity is undoubtedly the teaching of Jesus with respect to God; that is, with respect to absolute truth. the Now the writers both of the Epistle to the Colossians and of the general Epistle of Peter make use of an expression which, though translated "knowledge of God," should, of course, be full, exact, that is, scientific knowledge of God. Again, the subtlest of the medieval thinkers, Huxley once hazarded, was Thomas Aquinas, and Aquinas laid it down in the "Summa," that the science of theology, tht is, of the Word of God, was the only one absolute science. Again, one of the greatest Grecians and churchmen of the last century was Dr. Westcott of Durham, and he, speaking of Pilate's famous question, draws an emphatic distinction between the Greek phrase used by the Roman and the phrase used by Jesus, showing that while the former referred to a mere relative sense of truth, the latter was intended to express absolute truth. Here then you have the principal writers of the New Testament, the greatest, perhaps, of the medieval thinkers, and one of the most brilliant of modern scholars claiming that spiritual truth is the most absolute, the most exact, and consequently the most scientific form of knowledge in the world. No wonder that Jesus said, "Ye shall know the truth, and the truth shall make you free." "The freedom of the individual," writes West-cott, "is perfect conformity to the absolute—to that which is. Intellectually, this conformity is knowledge of the truth: morally, obedience to the divine law." . . .

Send a comment to the editors
NEXT IN THIS ISSUE
Article
The Christian Scientist's understanding of the word... 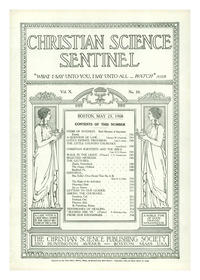