The Rest that Remaineth

He that overcometh shall inherit all things.

Many a weary and discouraged soul has been attracted to Christian Science by hearing the testimony of those who witness that it has brought them not only surcease of pain, but rest of mind and content of heart, and through misapprehension there are those who have been led to think that to become a student of Christian Science is immediately to find that exemption from the struggle for subsistence and success which enters so largely into the world's sense of happiness. Later on, when there has come a clearer understanding of the number, the greatness, and the insistency of the demands which the ideal life makes upon us,—when the subtle workings of error, and the extent of its domain in human thought have been partially uncovered, and the warfare with it has been seriously entered upon, then some have been known to express surprise, and even disappointment that their expectations of a quiet, comfortable time, in following the behests of Christian Science, have not been realized. Said one recently, "Can you explain how it is that I should have so many problems to meet? They keep me hustling every minute, and there seems to be no let-up at all." The answer was that the work probably came to him because it had to be done, because with God's help he could do it, and because in the doing he was to realize that spiritual advance for which he had long and earnestly prayed.

Mr. Van Dyke tells us of one Hermas, who came upon "that sadness of youth into which the old cannot enter,"—a sadness more bitter because there is in it "a fever of angry surprise that the world should so soon be a disappointment, and life so soon take on the look of a failure." Despite this, he yet "knew that he must go on," for "his honor, his conscience, his duty" had "bound him." A half conscious sense of this kind sometimes touches the young Scientist, and it is likely to bring him many an unhappy day if he is unable to analyze the situation, and thus come to see that the apparent excitation and assault of error is but the reflex mortal aspect of an experience which has untold promise of good; viz., progressive awakening to truth. In the midst of weariness, the glamour of a coveted ease sometimes leads us to forget that the call of God is, and ever has been, to a warfare whose strenuousness was vividly apprehended by St. Paul when he said to the Ephesians, "We wrestle not against flesh and blood, but against principalities, against powers, against the rulers of the darkness of this world, against spiritual wickedness in high places; wherefore take unto you the whole armor of God." 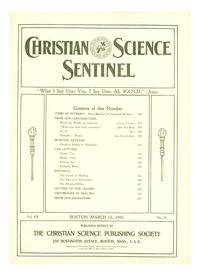