In the 11th chapter of Hebrews, Paul says, "By faith Abraham, when he was called to go out into a place which he should after receive for an inheritance, obeyed; and he went out, not knowing whither he went.... For he looked for a city which hath foundations, whose builder and maker is God.... These all died in faith, not having received the promises, but having seen them afar off,... and confessed that they were strangers and pilgrims on the earth. For they that say such things declare plainly that they seek a country.... They desire a better country, that is, an heavenly: wherefore God is not ashamed to be called their God: for he hath prepared for them a city."

Joseph Rotherham, in his translation of the New Testament, writes the fourteenth verse of this chapter, "For they who such things as these are saving, are making [it] plainly manifest that a paternal-home they are intently seeking." 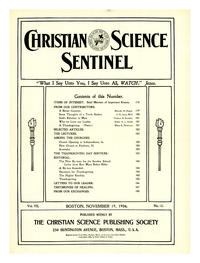