The detailed statistics of immigration during the month of April show a large increase over April of last year and over all previous months of the present fiscal year. The total of 126,286 was so large that if the figures for May and June are no larger than for those months last year the aggregate for the fiscal year will be 803,272, thus surpassing the highest previous total for a single fiscal year, which was made in 1882, when the number of immigrants was 788,992. As May usually shows the highest figures of any month in the year and the arrivals of immigrants in June are usually above the average of other months, there is reason to believe that the total for this year will reach 860,000.

The Geological Survey has had prepared a model of the extensive dam to be constructed on Salt River, sixty-five miles above Phoenix, Ariz. This dam will be among the first and also among the largest irrigation enterprises to be undertaken by the Government under the new law. The dam is to be 188 feet thick at the base, 830 feet long at the top, 250 feet high. It will contain 11,600,000 cubic feet of masonry. The reservoir to be constructed will drain over six thousand miles of territory and add three hundred thousand acres to the tillable area in the vicinity of Phoenix.

Send a comment to the editors
NEXT IN THIS ISSUE
Article
"What is Christian Science?" 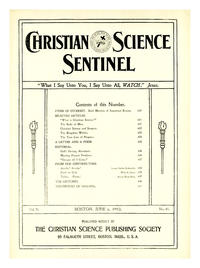