Though Christian Scientists may differ from others in...

Though Christian Scientists may differ from others in their understanding of the nature of disease, they recognize that it exists in human experience and must be dealt with intelligently. Whether or not the administration of medicine, one system of which is supposed to cure by producing a like disease while another proposes to cure by producing a dissimilar disease, is more intelligent than the modern theory that all causation is mental, remains to be demonstrated to a large portion of the people, but most modern physicians admit that the mental condition has much to do with the physical, and not one of them has ever been able to draw the line and say, Thus far and no farther. While on the other hand, Christian Scientists are proving daily that divine Mind understood and relied upon as the only power, does overcome disease. Alfred Farlow.In New Bedford (Mass.) Evening Mercury. 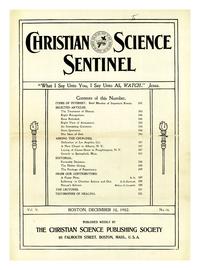