There is a popular belief that chronometers, those delicate pieces of mechanism which enable the mariner to tell to a nicety where he is upon the ocean, are made only in England. One will be told even in Maiden Lane that England is chronometer-maker to the world. This was true at one time, but now, according to shipmasters, America turns out excellent chronometers. There are, however, only three American makers as against numerous British firms. Many of the instruments in use in the United States navy are of American make. These chronometers are purchased on trial. The delicate instrument is subjected to extremes of temperature, by means of which its variations are ascertained. No instrument leaves the maker's hands until it has been thoroughly tested, or before it is three years old. In this period there is ample opportunity for developing its peculiarities. When it is understood that an error of four seconds on the part of the chronometer will put a skipper a mile out of his course, the necessity for the most careful and thorough test is apparent.

Even when an instrument has been tested to the satisfaction of the experts, and has been finally adjusted, only a skilled man can be allowed to carry it from the workshop to the ship. One firm alone has a dozen of these carriers constantly employed. They are not, of course, dealing all the time with new chronometers; there are from four hundred to five hundred always in stock from ships arriving in this port from all parts of the world. As soon as a ship comes into port its chronometer is usually sent ashore for rating, that is to say, it is carefully observed until the ship is ready to sail, when the variation is reported to the captain, who can then make his calculations accordingly. The chronometers of the transatlantic liners are sent ashore for rating every time they come into port. The greatest care is taken of chronometers on board ship, and on all first-class ships there are usually three, one being for deck observation. The most perfect one of the lot is usually placed in a dry, but well ventilated apartment amidship, where it is firmly screwed down, and should there be fear of dampness, wrapped in a heavy woolen blanket. On the government vessels the chronometer is placed in a case lined and padded with curled hair, which keeps it from being jarred. The smallest speck of rust on the balan spring might cause a chronometer to lose its accuracy. A first-class chronometer costs $250, and one of the same grade capable of telegraphing its own time, sells at $450.—New York Evening Post. 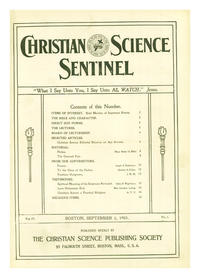