The determination of the real and exact time is one of the most important functions of an astronomical observatory. In former days each observatory supplied standard time to the country immediately surrounding it. In eastern Massachusetts the Harvard observatory had an important standard time plant, owning its own wires, which fairly criss-crossed Boston and its suburbs.

A few years ago the corporation voted it expedient to abandon the outside service, especially in view of the fact that the naval observatory at Washington had begun furnishing time free to all comers, so that the telegraph companies were able to distribute it generally throughout the country. 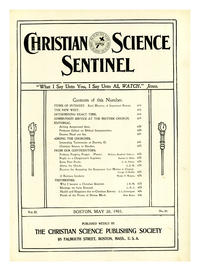