The lecture on Christian Science which Judge William G. Ewing delivered here Monday evening, February 4, attracted an audience that packed City Hall to the doors. It was such a noteworthy gathering of the intellectual and religious people of the city, that one of the daily papers printed the following statement:—

"In reference to the audience the speaker stated afterwards to a Whig reporter: 'You can say for me that, though I have been in almost every city in the United States, from the Atlantic to the Pacific and from your Dominions to the Mexican border, yet have I never addressed a more thoughtful or more appreciative audience.'" 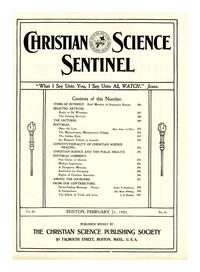