THE heliograph, which is being put to such effective use in South Africa by both Briton and Boer, is a modern adaptation of one of the oldest forms of signaling apparatus known to military science. Heliographing, as the name implies, is sun-telegraphing, and General White's signal men in despatching news from sorely pressed Ladysmith are using the same device, only in more perfected form, that the wicked small boy with a bit of looking-glass in his grimy fist employs to attract the attention of his fellows across the schoolroom by flashing the sun in their eyes.

Mirror-signaling was early used by the North American Indians, and is no doubt partially responsible for the marvelously rapid dissemination of news on the plains noted by many American army officers. The modern war heliograph is almost equally simple in theory and practice. The sending apparatus consists of a mirror mounted on a tripod and hung on both horizontal and vertical axes with adjusting screws admitting of minute changes of plane. With this mirror the sun's rays are flashed for miles, directed by painstaking adjustments into the field of vision of a receiving telescope, also tripod-mounted. The code is similar to that used in electric telegraphy. Flashes, long or short, represent dots and dashes, and the Morse or any other code, including ciphers, can be readily used. 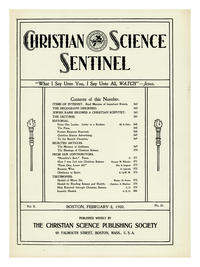