with contributions from Thomas a Kempis

The (Unitarian) Christian Register says: "Austerity is lean, haggard, wild of eye. It does not love human nature genially, and too often confounds its weaknesses and foibles with its vices and crimes. There is no urbanity in its conceptions of duty, but a dry, craggy outline that more often repels than wins. Austerity sat in the seat of power when religion was bases upon fear, when men were willing to take the bitter drug as antidote for the fire that is not quenched, the worm that never dies. As fear has vacated the seat of authority, the austere and frightful in religion find themselves without occupation. Men and women can no longer be scared into repentance. Religion is no longer to be regarded as a sour and bitter drug to be forced upon resisting patients, but a force that sets men and women in the normal, rational, reasonable way of life, the sane, true method of living, where all the powers of mind and body join in a symphony of harmonious action."

The Christian Advocate says: "Recently an account was given in the Christian Advocate of the union of the United Presbyterians with the Free Church of Scotland. Intelligence has been received in this country that it is meeting with serious opposition in the Highlands. The Highlanders believe that the principles of the Free Church are compromised, and empty benches are characteristic of the attendance under the auspices of the new organization; while hundreds are attending impromptu meetings in halls and elsewhere, conducted under the old Church rules. Many secessions are expected. We are told that in the Lowlands the amalgamation has been well received. It is pleasing to see any manifestations of strong adherence to conscientious convictions. There may be narrowness and blunders, and small things may be exalted to the place of high things; but steadfast adherence to what one believes it the most respectable trait in human nature." 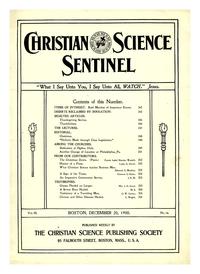