A Most gratifying occasion was that of the lecture of Edward A. Kimball, C.S.D., at Kansas City, on Sunday, September 30, 1900, under the auspices of the First and Second Churches of Christ, Scientist, of that city.

The lecture was delivered in Convention Hall, wherein Mr. Bryan was nominated as the Democratic candidate for President, and there were present, according to the newspaper accounts, ten thousand people. Private letters fix the number at eight thousand. Either number is sufficiently remarkable, and evidences, in an almost startling manner, the growing and intense interest in Christian Science in Kansas City and the adjacent country. 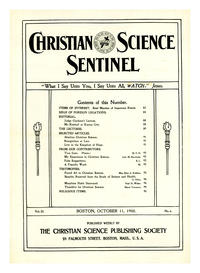