Wednesday, June 28, was the annual commencement of Harvard College. Among the interesting features of the occasion was the conferring of honorary degrees. The degree LL.D. was conferred upon Jules Martin Cambon, ambassador from France to the United States; Rear Admiral Sampson; Major-General Wood, military governor of Santiago; Kentaro Kaneko, who graduated from Harvard College with honors, twenty years ago, and is at present the secretary of the interior of the Japanese Cabinet; and Arthur Irvin Hadley, president-elect of Yale University. 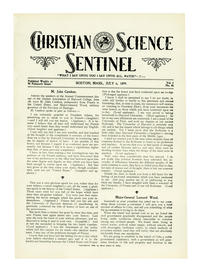