At the Christmas dinner of the Independent Club in Buffalo, N. Y., the Hon. Chauncey M. Depew expressed his views on the subject of territorial expansion. From his remarks we extract the following:—

We face at this Christmastide questions as vital to the future of our country as any which in the past have been met and successfully answered. The federation of Washington in 1798 has developed into the United States of 1898, with that inherent power which is always attached to national sovereignty, of acquiring territory by conquest or cession. I do not think any body of constitutional lawyers will doubt that among the reserved powers of sovereignty which belong to us as a nation, is the right to administer the affairs of territories acquired by conquest or by cession, under such form of government as Congress and the executive may prescribe. 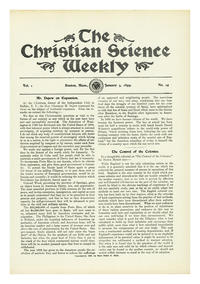