I had a habit of smoking nearly all the time from morning...

I had a habit of smoking nearly all the time from morning until night. Several times I tried to give it up, but after two or three days I would crave it so that I would smoke harder than ever. In 1890 I began to attend Christian Science meetings, and shortly after went through a class of instruction in Christian Science. During the second lesson the teacher turned to page 405 in Science and Health and read these lines, "Puffing the obnoxious fumes of tobacco, or chewing a leaf naturally attractive to no animal except a loathsome worm,—" that was enough for me. I caught a glimpse of the Christ meaning. I went home and threw three pipes and a paper of tobacco into the stove, and have never had any desire for the weed since.

I know that Christian Science will destroy all bad habits, and all sickness and sin. We have been benefited in many different ways. Our little daughter was healed of a severe fever in a few hours, and at another time of measles. She was all broken out on Saturday, but through the realization of Truth the claim entirely disappeared on Sunday, and she went to school on Monday as well as ever, not losing a day; while at least a dozen children in the same school remained at home from two to three weeks on account of the measles. 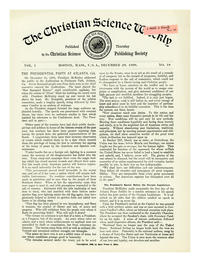