I loved “the scientific statement of being”

I was twenty-three and not married, at a time when that was considered being an “old maid.” I was getting my master’s degree in math while teaching at Southern Methodist University (SMU) in Dallas. There hadn’t been many men around during World War II, but now the war was over.

I had been reading the book of Psalms in the Bible, and one day I got such a peaceful feeling. I’d never felt anything like it before. Not many days later, a friend of mine set another girl and me up on a blind date with two guys. I ended up connecting with one of the guys, who was back from the war and going to SMU on the GI Bill. He asked me to marry him a couple of days later. I was surprised and couldn’t give him an answer at that time, but we were together every chance we could get.

Send a comment to the editors
NEXT IN THIS ISSUE
TeenConnect: Your Healings
Learning to trust God for healing 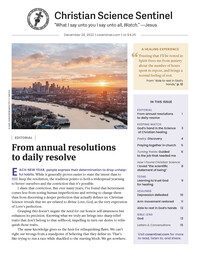