With the same confidence that Jesus had in God as the one and only power, we can be courageous as we follow God’s loving guidance today.

Jesus knew what was coming. He hinted at it early on when he said, “Destroy this temple, and in three days I will raise it up” (John 2:19). He was speaking of his body and implying that following his crucifixion, he would spend three days in a tomb praying.

If Jesus was aware of his impending encounter with the cross, why did he return to Jerusalem? Wouldn’t it have been much smarter to avoid the place where, just a few days after his arrival, he would be crucified? 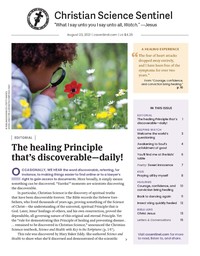