We can gladly be a witness to how salutary and strengthening it is to gracefully obey God’s call.

For early Christians, Saul, a very fearsome individual, had become their number one enemy. His reputation for bringing harm to anyone who followed the teachings of Christ Jesus went before him. Persecution of this nature contributed to Jesus’ followers becoming “all scattered abroad throughout the regions of Judæa and Samaria, except the apostles” (Acts 8:1). With a large number of Christians making their homes in the city of Damascus, Saul traveled in that direction, determined to capture them.

On his way to Damascus, Saul’s most life-changing experience occurred. He heard the voice of Christ and suddenly found himself completely blind. In his blindness, it became clear that he had been devoting his life to something very, very wrong: persecution, sometimes with deadly consequences, of those who followed Jesus’ example. 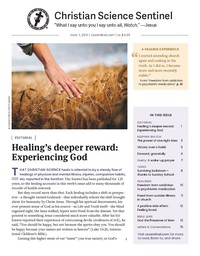