When you’re facing the unknown

For 16 years, school had been the structure of my life. Now all that was gone. Just out of college and having completed a summer project, I was supposed to be ready to face the future. But I didn’t feel ready. Decisions (important ones!)—what to do, where to start, where to go—loomed large. I was afraid of making the wrong choices.

My friends seemed to have it all figured out. But I was overwhelmed—and stressed. The money I’d made during the summer wouldn’t last long, and I needed a job. I also needed direction and a feeling of purpose.

Uppermost in my thoughts was a relationship I was in, which either needed to go forward or end. He was in Massachusetts; I was in the Midwest. I flew in to see him, but by the end of the weekend I still felt conflicted. It was evening, the night before I was supposed to fly out, when I heard the chimes at The Mother Church, The First Church of Christ, Scientist, in Boston.

There was an evening church service, and I walked over to attend. I felt at home, now anchored. Tears were streaming down my cheeks when we sang a hymn by Mary Baker Eddy, which begins, “Shepherd, show me how to go” (Poems, p. 14). It was my own from-the-heart prayer.

I was supposed to be ready to face the future. But I didn’t feel ready.

Back at my hotel and still praying my heart out, I noticed a Gideon Bible on the desk, open to Psalms. Glancing down, I saw this: “God is in the midst of her; she shall not be moved [overwhelmed, that said to me]: God shall help her, and that right early [now, that said to me]” (Psalms 46:5). I read it over and over, feeling a rush of comfort and assurance. At that moment it was clear to me that the relationship wasn’t right, and I genuinely felt God would be with me—and him, too—and give me courage, step by step. I was relieved and slept all night.

The whole way home, I thought about that promise from the Bible, and the divine authority and tenderness behind it. I had a feeling of, God gave me that message right when I needed it! And I knew with more conviction that I could go forward, unafraid of what might happen, by trusting Him to direct and protect me every step of the way. I had a feeling of sureness that going forward wasn’t going to be fumbling along on my own; I was God-supported, God-sustained.

Although I’d been told no one was hiring English majors—me!—the day I got home, a position with a prominent company was posted that exactly fit my skill set. I applied and was hired. It was only ten miles from my dad, and he invited me to live at home so I could save money. Soon after that, a wonderful relationship with my twin brother’s college roommate developed. The following year we were married.

The interesting part of all this was that I didn’t know, or even feel the need to know, what would happen. Yet after that weekend in Boston, all my fear about the future and about making mistakes was gone. This line from Hymn 169 in the Christian Science Hymnal helped me: “I do not ask to see / The distant scene; one step enough for me” (John Henry Newman).

Instead of being a grind, each day was a new adventure in trusting God.

One step. Amazingly, I was comfortable with that. Instead of being a grind, each day was a new adventure in trusting God. Day by day, my way was pointed out. Never again did I feel like a piece of flotsam and jetsam, floating aimlessly in the ocean. God had anchored me, and I’d begun to learn that my purpose, no matter what outward form it might take, would always be the same—to glorify God in everything I did.

You might be struggling with your own unknowns right now. And it may seem like there are many: health, school, finances, even the future in general. But deep down within each of us is God’s law of His allness and goodness. It’s “in the midst of us”—at the core of our being. And this law—sound, solid, certain—is always able to direct, correct, and protect us when acknowledged and appealed to. My experience proved how rock-solid this law of Love is; it’s the nature of divine Love: unceasing, unconditional, invariable, no matter what we’re facing. 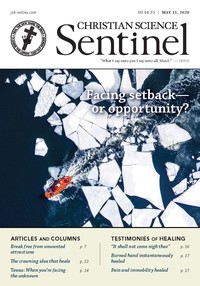