Back in the game after ankle injury

During my stay at a summer camp in the United States, we had a lot of sports activities every day. Once, while we were playing a soccer match, I decided to be the goalie for my team. As the opposing team’s offense approached, I came out of the box and went toward them to try to block the ball. I was successful, but the three attackers fell on top of me, and that’s when I was kicked in the ankle several times. The other players weren’t trying to hurt me; the incident happened during the course of the action, and nobody was responsible.

The resulting pain was severe for five minutes and then disappeared. That evening, however, the pain returned, to the point that I had trouble walking and putting weight on my foot. I decided to see someone from the camp about the ankle, and this person wrapped it in a bandage. The next day my camp counselor prayed with me in the morning and again in the evening. 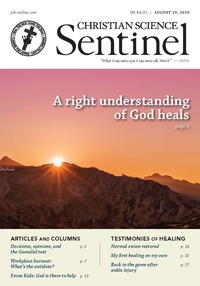