Q: I feel like I don’t have faith in God.

A: When I was in my twenties, I got really sick. Our neighbor, a doctor, overheard my coughing and told my husband I should be in the hospital, adding, “That’s pneumonia.” My worried husband, who wasn’t studying Christian Science at the time, agreed. He told me that if I wasn’t better by morning, he wanted to take me to the emergency room.

I’d had other healings through prayer before, so all that long night I prayed—or tried to. But fear and doubt, it seemed, were all I had. And my faith in everything that I believed felt sorely tested.

As the sun came up, I was still exhausted and no better, and I felt ready to throw in the towel. I’ve given this prayer thing all I’ve got, I thought. But then, wanting to be really honest with myself, I asked, Have I really? Is every one of my thoughts on the side of God, His love, and His care? A quick inventory of my thoughts from the previous night showed that very few had been; most had been more on the side of fear and doubt.

Right then I apologized to God for giving up, then added this P.S.: “But, God, there’s one thing I’ll never give up on—that You are Love. That, I’m sure of.”

Well, with that, it was like the floodgates opened. Starting with that one tiny thing I had faith in, suddenly all the proofs I’d had of God’s loving care for me and my family poured into my thoughts. In minutes, all the fear, doubt, and disbelief was gone. My fever was also gone. I felt filled with God’s love for me, and I got up. I made breakfast for my family and could speak without coughing. In a couple of days I was totally well.

While it may seem like that early morning turning point was a result of my faith—tiny though it was—I can see now that every step toward healing was in fact God’s love getting through to me. I’ve learned in Christian Science that God is the source, the origin, the loving creator of everything good, and we are the expression or reflection of God. In other words, we are created to reflect all of God’s goodness and love, but we don’t generate it ourselves. So even what appeared to be “my” faith had its source in God. It was really His faithfulness to me reflected right back to Him.

Even what appeared to be “my” faith had its source in God. It was really His faithfulness to me reflected right back to Him.

I learned more about this from my study of the Bible, where it says of faith: “It is the gift of God” (Ephesians 2:8). This means we all must have faith, even if we haven’t discovered it yet, because it’s God-given. And this faith has unlimited potential to lift us up and move us forward because it’s sourced in the infinite—God. “If you have faith as small as a mustard seed,” Jesus told his disciples, “you can say to this mulberry tree, ‘Be uprooted and planted in the sea,’ and it will obey you” (Luke 17:6, New International Version).

That’s what my “You are Love” moment was about. The very first thing I’d learned as a little girl in the Christian Science Sunday School was that God is Love. Lots had happened between my early days in Sunday School and that night when I needed healing, but “God is Love” was my mustard seed. It started small, but it came to my rescue when my faith was tested. And it has continued to, in more instances than I can count. And every time, in some sweet, tangible way, that sound, solid, overarching truth that He is Love—unstoppable, omnipotent, irresistible—has supported me in knowing Him even better and trusting Him even more.

Your mustard seed may be different, but it’s there, because it’s a gift God has given you that can never be taken away. And through His love you’ll find it—and it will grow. 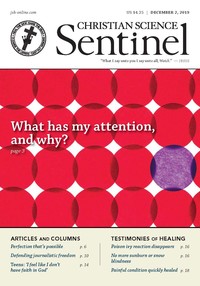