I have given the name to all the Christian Science periodicals. The first was The Christian Science Journal, designed to put on record the divine Science of Truth; the second I entitled Sentinel, intended to hold guard over Truth, Life, and Love; the third, Der Herold der Christian Science, to proclaim the universal activity and availability of Truth; the next I named Monitor, to spread undivided the Science that operates unspent. The object of the Monitor is to injure no man, but to bless all mankind.

Like the three other periodicals Mary Baker Eddy established, the Monitor brings the compassionate, healing message of Christian Science to every corner of the globe—magnifying good and impelling prayer for our communities and world.

The daily religious column—an idea initiated by Mrs. Eddy—emanates from this foundation of blessing all mankind. Mrs. Eddy envisioned the Monitor as a “newspaper for the home, but she expected it to have a healing effect on the world” (Yvonne Caché Fettweis and Robert Townsend Warneck, “Crowned by Love (1908–1910),” The Christian Science Journal, December 1996). 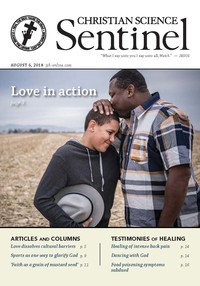