Back injury and irritating rash healed

This happened when I experienced healing of a painful back injury that occurred while I was working with a trail crew in a wilderness area in the Rocky Mountains. I couldn’t call someone to pray for me because in that place in those days there was no communication with the outside world. So my own prayers, as well as the Bible’s admonition to “acquaint now thyself with him, and be at peace” (Job 22:21), became vital and meaningful to me. I mark that experience as the time I became a practicing student of Christian Science. 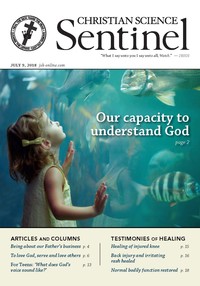