In February 2013, my regular obstetrician diagnosed premature menopause as well as a very serious illness that affected ovarian functions. I was only 23 years old. He told me that under such conditions, I would never be able to have children because this illness was considered incurable. As far as he was concerned, I was barren. That August, he confirmed the diagnosis after performing further tests.

I decided to pray because only God could bring a solution to these problems. While the doctor was telling me there was no hope, I knew that in God there is always hope. God had already done a lot for me, my family, and my friends. God is always strong. He does not change. I knew He was going to meet my need and heal me.

Send a comment to the editors
NEXT IN THIS ISSUE
Image and Inspiration
'Peace, that speaks the heavenly Giver' 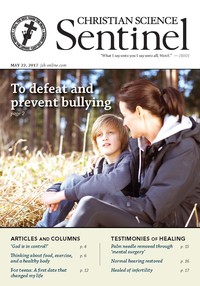