Can one prayer help end a war?

The disturbing viral photo from Syria—of a little five-year-old boy, bewildered, bloodied, and muddied, rescued from the rubble caused by air strikes—was heartbreaking and compelling to all who saw it in the news. “Can one photo end a war?” read the caption of an NPR report acknowledging humanity’s yearning to help, seen in an immediate uptick in humanitarian aid for Syria. Many want to do much more. But “there isn’t an obvious mechanism through which we can turn our anger and compassion into change,” ends the report.

Mechanism, no. But there is a powerful tool each and every one of us can employ that will help the people in war-torn regions and hasten the end of war: prayer that affirms God’s love and care for His entire creation. 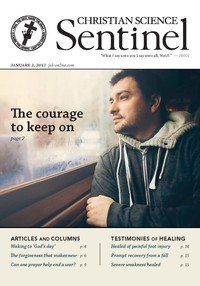